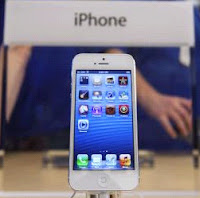 The release of Apple gadget geeks must have known that the company will launch two new devices, the iPhone and iPhone 5s 5c, on September 10 that the specifications have been leaked many times.

Surprisingly, an analyst predicted that Apple would launch the iPhone 5s with 128GB of storage. Really?  Quoted from gsmarena.com,

128 GB model of iPhone 5s are likely to be rewarded 499 dollars, under Apple's current pricing scheme.

Ming-Chi Kuo also expect the next iPhone will also be supported by the new A7 chip that has a 1 GB RAM LPDDR3. This new chip is said to be developed on ARMv8 and 20 percent more efficient than the previous A6 SoC.

The analysis also estimates the camera iPhone 5s will have "upgraded" with apperture F/2.0 and dual-LED flash. That means the camera on the device that has better performance in low light than the previous model.  Ming-Chi Kuo also hope Apple will launch the iPhone 5s for the gold color in addition to classic colors, black and white.